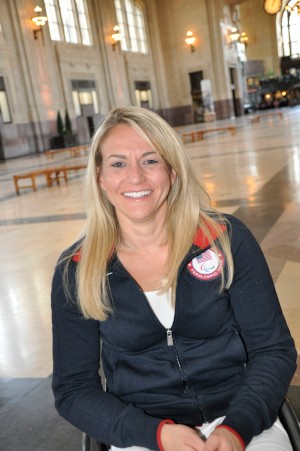 An Olympic gold medalist for wheelchair basketball and a silver medalist for the U.S. Paralympic swim team, Sarah works as an Assistant Jackson County Prosecutor.

Sarah Castle was born and raised in Colorado. At the age of eleven she became paralyzed and was diagnosed with Acute Transverse Myelitis. In the early months of her disability, Sarah was exposed to sports for people with disabilities, and instantly began participating in swimming, track and field, wheelchair basketball, and skiing. Her early exposure to sport led her to compete in Paralympic swimming competitions as early as age fourteen.

At sixteen, Sarah competed at her first Paralympic Games in Sydney, Australia, and won a silver medal in the 100 meter breaststroke. From there her athletic career took off, as she competed in swimming competitions around the country and world, and was recruited to swim and play wheelchair basketball at the University of Illinois.

In 2004, she competed in the Paralympic Games in Athens, and finished fourth in the 100 meter breaststroke. Sarah’s swimming career ended in 2004 as a result of multiple shoulder injuries, but her athletic career continued, and in 2005 she was named to the United States Women’s Wheelchair Basketball Team. Sarah played wheelchair basketball as a member of the US National Team from 2005 to 2012. She competed in two Paralympic Games, bringing home a gold medal in 2008. She was also a member of the 2006 World Championship team that brought home a silver medal, and the 2010 World Championship team that brought home a gold medal.

Sarah graduated from the University of Illinois with a Bachelor’s Degree in Political Science with an emphasis in Disability Studies, and a Graduate Degree in Political Science and Civic Leadership. In 2012, Sarah graduated from the University of Missouri, Kansas City Law School. Sarah describes herself as an advocate. She currently works as a Jackson County Assistant Prosecuting Attorney, and serves as the Diversion Manager. Sarah is also the President of the Board of Directors for the National Wheelchair Basketball Association. In 2017, Sarah, along with thirteen young adults and children, formed Y4KC, a youth organization dedicated to making Kansas City better through service. Y4KC’s first project was to host a wheelchair basketball event, to raise awareness and funds about the benefits of access to sport for children with disabilities.

Youth for Kansas City focuses on two central principles: involvement and mentorship. Y4KC provides unique volunteer opportunities to Kansas City youth to teach them the necessary skills to better their community in an effort to cultivate the next generation of Kansas City leaders.